Therefore, thank God for any solution that at least brings the official world closer to the possibilities of current technology. One of the most successful is being developed and produced by the Czech company HD MEDIA. More than a decade ago, it took the topic of electronic messaging into the council and the voting system for the council. And it has developed the Consolidation program, which allows publishing materials to the general public. The Pabliko voting system, which has the flexibility to operate within the Rules of Procedure. In the current version, its behaviour can be modified by 90 different parameters. With the latest version of Pabliko is possible to add, for example, a conference system or a camera system with fully automatic control during discussions or saving the spoken word in real time in an MP3 / OGG audio file.

The voting system is based on hardware components developed exclusively in the Czech Republic – such as the Holesov Company ELKO EP, the author of wireless and wired voting units. They have On / Again / Abstain / Discussion / Comment / Logout options. Each of the councillors will acquire a specific unit at the constituent council with which they are already authorized.

The iNELS RF wireless variant is particularly suitable for external areas where the voting equipment is connected to the projection unit before the meeting, where the course of the whole meeting is projected. The range of the units is up to 100 meters in open space. In contrast, wired units are firmly built into tables and can be even more elegant. Their surface is made of high-quality tempered glass and a soft touch is enough to operate. Some cities also use additional feedback in the form of sound signalling and vibration.

The Pabliko server is used to operate the whole system, which can be run on a PC, laptop or miniPC with Windows operating system. It is also connected to the voting hardware and the projection unit. It is controlled by the Pabliko Client application, which can run on one or more devices simultaneously. This will identify the person (s) who can perform basic tasks such as opening negotiations, moving to discussion or voting, inserting counterproposals, modifying materials, and screening attached documents. At runtime, counterproposals can be submitted, discussion can be entered, new messages can be posted, or their order can be easily modified. A protocol is created after each vote.

What at first glance looks like perhaps an unnecessarily oversized solution, in practice, means saving tens of hours on analogue recording of the entire meeting. This is one of the reasons why Konsiliář and Pabliko are now being used by dozens of Czech cities, including Brno, Liberec, Břeclav and Kroměříž. It is there that they give us hope to change at least a little bit about the very rigid organization of meetings and negotiations. 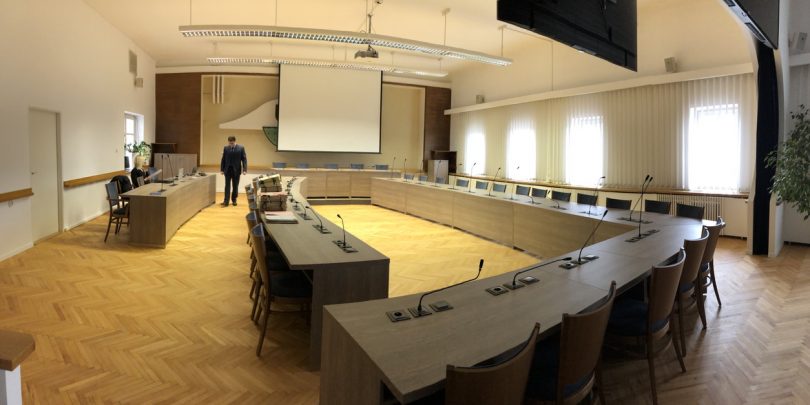 Behind sandstone we hide the automation in a unique Polish project

The thinnest, smallest, most powerful. Revolution in bus installations

When it comes to electricity, Americans are conservative

The Internet of things. What is fiction and what is fact?