“I come from southern Slovakia, where Hungarian is a natural language. When I was in the military  I used to be in Kroměříž, “he explains at the beginning, to which he owes his perfect knowledge of Czech. In 2009, he decided to use the combination of Hungarian, Slovak, Czech and English in his business. Thanks to the contact of his friend Jiří Konečný, he found himself at the Slovak branch of ELKO EP in November. “I was contacted on Monday, we met on Wednesday and the next day we had a signed contract,” he recalls of the meeting, which determined his career life for the next years.

Fast-paced events took over. Because a month later he became the managing director of the Hungarian branch and had to rebuild the team. “The original executive lived near Lake Balaton, so he had the company’s headquarters there. By the time we decided to move to Budapest, we had lost the vast majority of the original employees, because it was simply impossible to commute a hundred or twenty kilometres a day and back again. Moreover, technology did not yet enable what it is possible today. That is, various home offices or document sharing. That’s why we had to start from scratch. We started again, with new people and in many ways also completely differently, “said Olivér.

After ten years of business, he already knows exactly what needs Hungarian customers have. The focus of the local branch’s success lies in the relay. “In the case of Logus90 switches, we have long been the best in the entire group,” he says with a smile. ELKO EP and iNELS products have a good reputation here and are offered by all important chains that deal with the electrical range. The iNELS RF-Control wireless wiring system is also thriving here, which is especially popular with people who do not want to reconstruct it in a complicated way, but at the same time, want to enjoy the comfort that modern technologies bring. 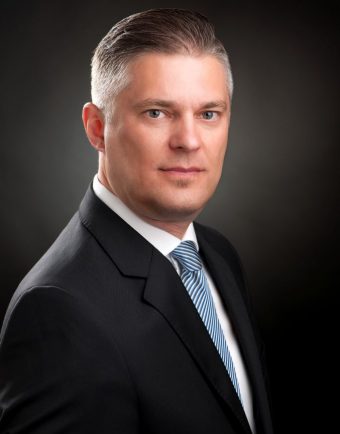 In addition, however, the branch under the leadership of Oliver Kiss also implemented a number of large projects. “Our solution is, for example, in the Jamie Oliver restaurant in Budapest, the famous neo-renaissance building of the State Opera, the legendary Corvin cinema or the oldest hotel in the Hungarian metropolis of Pest-Buda. Most of the time, we do major lighting renovations and overall cost optimization, “says Oliver Kiss.

Today, his team is involved, for example, in the construction of a large Czech company headquarters, which is building its Hungarian headquarters on an area of about 10,000 square meters, including logistics facilities and warehouses and on a number of development projects in which housing units are created. “We are dealing with all types at the moment. Four-apartment and twenty-nine-apartment units, “comments the elegant guy.

5G, IoT, AI. These are priorities

When we ask him, as a polyglot, to compare Hungary with the Czech Republic or Slovakia, he gives a good feeling that the Hungarian government is a hair bolder in the implementation of new technologies.

“A lot goes into that. The government invests considerable resources in the overall infrastructure. Smart poles, intelligent parking houses, advanced camera systems are being built here. But before launch, there are also the first 5G transmitters. It is not just about Budapest, but also about a number of smaller cities. The potential of the whole field of IoT and artificial intelligence is believed here. Once the structure is built, the technologies will become more accessible to end users. ”When it comes to Hungarian specifics, according to Oliver Kiss, the local customer is very similar to the Czech or Slovak one. “Even here, more and more people have been emphasizing the ecological footprint lately. It therefore seeks to optimize energy or family consumption. But even though many Hungarians speak English, the locals cling to the applications so that everything is also in Hungarian, “concludes the man, who is fluent in four languages.